Be inspired by innovations and projects that are transforming cities this November at the 2017 International Urban Design Conference.

Ms Rebecca Finn, Urban Designer Tract will be discussing “Reclaiming the street: A decade of recreating America’s streets and the ‘sadik-khan’ effect”.

In 2007, in response to decades of car-centric planning, New York City’s Department of Transportation Commissioner Janette Sadik-Khan led change that completely reimagined the city’s streets and drastically improved conditions for pedestrians and cyclists throughout the city.

The most notable project was in Times Square where large swathes of the street were turned into a pedestrian plaza and blocks of Broadway were closed to traffic. The changes happened quickly and the materials were inexpensive. In a stroke of brilliance, New York City Department of Transportation referred to this one and the many other similar projects as ‘pilot projects’.

If they proved not to work they could be removed and the street could easily be returned to its former state. But, for the most part the changes did work. Times Square and other initiatives, including the miles of new dedicated bike lanes have now been turned into permanent features and the public realm in New York City has been transformed.

What Janette Sadik-Khan and her team did in New York City was admirable, but the nation-wide phenomenon that followed is nothing short of incredible. Similar projects popped up all around the country. The mood was euphoric in transportation and design circles. The concept of streets as places solely for the automobile was finally being seriously challenged. While the idea of trying to improve streets wasn’t new, the speed of delivery was. The ‘pop-up’, ‘temporary’, ‘pilot’ culture had arrived. A decade on, this culture has made a huge impact on city streets both around the country and around the world.

In particular, this presentation examines how streets have been reimagined in Los Angeles as a result of this movement. Los Angeles has long been the poster child for the car-centric city, but this image has been seriously challenged over the last decade. Three projects that show this change will be showcased: CicLAvia (LA’s car-free streets program), MyFigueroa (Figueroa Street Streetscape Project) and Sunset Triangle Plaza.

This Conference is an opportunity for design professionals to exchange ideas and experiences, to be creative and visionary and to contribute to redesigning our urban futures.

Two new schools will open in the inner-city in Brisbane and another significantly expanded as the Palaszczuk Government committed $500 million to the Building Future Schools Fund.

The fund’s purposes centres around building new schools, securing land in Queensland’s fastest growing regions and creating the necessary jobs to accomplish the projects in place.

“We want every child to benefit from a quality education no matter where they live. That’s why we are investing $500 million over five years to help deliver world class education facilities where they are needed most,” she said.

Ms Palaszczuk said through the Fund, the Advancing Inner City Schools initiative will:

The Palaszczuk Government also claimed to have plans already underway for new state high schools in other growth areas across Queensland including Mt Low in Townsville, North Lakes/Mango Hill north of Brisbane, Calliope near Gladstone and Yarrabilba in South Logan.

Deputy Premier, Minister for Infrastructure and Planning and Member for South Brisbane Jackie Trad said over the last 50 years, Brisbane used all available land to expand existing school sites, but she said you can only expand so much.

This article was originally published by The Urban Developer.

Our cities and regions depend on the critical nodes and arteries that together comprise urban infrastructure systems. This includes energy, food, water, sewerage and communications.

The positioning of critical infrastructure is crucial to our understanding of the world we live in and how we see ourselves. It’s our means of survival as Homo urbanis.

This means key questions around critical infrastructure need to be better considered. How is it critical, when and for whom?

Critical infrastructure has received much attention in recent years. The reasons include concerns about exposure to terrorist attack, disruption by disasters, rising awareness of the interdependent nature of urban infrastructure, and changes in ownership and responsibility for infrastructure assets.

… those physical facilities, supply chains, information technologies and communication networks which, if destroyed, degraded or rendered unavailable for an extended period, would significantly impact on the social or economic wellbeing of the nation or affect Australia’s ability to conduct national defence and ensure national security.

This definition expands traditional thinking to include network and information infrastructure. However, the emphasis is on national security and defence issues such as espionage, sabotage and coercion. Infrastructure is defined as critical on the basis of what is at threat should it be destroyed or disabled, and how much that matters.

Yet what is critical about critical infrastructure is not just a matter of national security threats. It is also the key linkages between this infrastructure and human and environmental system vulnerability, integrity and equity.

Experiences of critical infrastructure are not equal, but highly contingent on political and economic priorities, influence and opportunity.

I will be an infrastructure prime minister.

Subsequently, his government’s focus seems to be largely on infrastructure projects – including urban transport infrastructure – “which drive … growth and jobs”.

Transport infrastructure is seen as a facilitator of growth and competitiveness in our cities. This is where much of Australia’s economic growth is generated. But, while important, promoting economic growth is not transport’s only major function.

Until recently, it was generally accepted that urban transport and land development needed to be planned in an integrated way, having regard to what city future was desired. Transport infrastructure investment would then help to achieve that city future.

While city planning was once a “tool for correcting and avoiding market failure”’, it is now much more about promoting economic growth by providing certainty for the development industry and reducing regulation.

Under this increasingly dominant view, city planning (by governments) is seen as a generally distorting influence on property markets. Regulation is a “transaction cost”.

For example, there is a disconnect between the TransApex major road program and urban planning in southeast Queensland. This program of four major road projects in Brisbane aimed to improve cross-city travel and keep the economy strong. However, TransApex was at odds with the southeast Queensland regional plan’s aim of promoting sustainability and reducing car dependency.

It has recently been suggested that all transport projects where benefits exceed costs by some margin should be built, apparently with little regard to the effects of those projects on city planning.

The significant limitations of cost-benefit analyses are well documented. It is particularly troubling that, for transport projects, these analyses rely on a flawed assumption that motorists aim to minimise generalised costs.

These are decisions about values as much as they are about economics. American philosopher Michael Sandel is concerned that conversations about the future are largely framed in technocratic (often economic) terms. This leaves public discourse “hollowed out”.

The social equity effects of transport investment are not usually taken into account. The public investment of about A$1 billion in the Gold Coast light rail disproportionately benefits residents, landowners and businesses close to the stations. Other Gold Coast residents – including many disadvantaged people – have to drive or make do with a relatively low-quality bus service.

With cities now urged to market themselves, “flagship” projects like the light rail are valued as means of giving cities an advantage in a world of footloose businesses and investors. These projects are considered important for growing the economy.

The Gold Coast light rail is an 18-year public-private partnership (PPP). PPP contracts frequently include “non-compete” clauses (no new competition with the PPP infrastructure). These can constrain future city planning decisions, however desirable they may be. 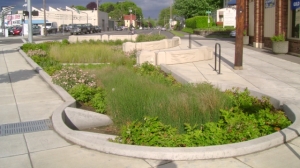 Benefits of green infrastructure include reduced urban heat, lower building energy demand and improved storm-water management. There may be drawbacks, but these can often be mitigated through good design. Issues include maintenance costs, tree roots, bushfire hazard and power-line interference.

Urban planners are increasingly asked to create and deliver urban greening strategies. So how does green infrastructure delivery fit within the capabilities and remit of planning?

Some of the many examples of successful demonstration are noted here. Many initiatives, ideas and practices are internationally transferable because of similarities in the constitution and function of planning systems.

So why aren’t we seeing more green infrastructure generally? Partly it is because planners are wary of new technologies and disruption to embedded practices. With this in mind, might the biggest challenge for planners be psychological rather than professional? To read more at the Conversation click here.

The 9th International Urban Design Conference will be held in Melbourne in November.  To express your interest in the 2016 Conference CLICK HERE.